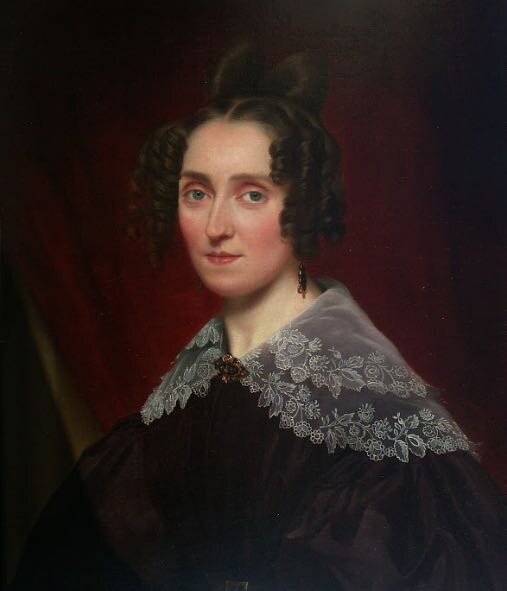 In the 1847 Revue et Gazette Musicale, a weekly French publication dedicated to classical music, a reviewer noted that that composer Louise Farrenc’s symphonies embodied “the highest symphonic talent among woman”, adding that Farrenc was “not only the first of her sex to approach the genre but one whose symphonies a great many male composers would be proud to have written.” In addition to writing three symphonies and an impressive catalogue of chamber music and solo pieces, Farrenc was a virtuoso pianist, pioneering scholar and the only female tenured professor in the 19th century at the Paris Conservatory (although she was only permitted to teach female students).

According to one recent study, the gender pay gap might not disappear until 2070, but even back in the mid 19th century, Farrenc wasn’t willing to accept the status quo. After the success of her elegant ‘Nonet’ for wind and strings, whose premiere in 1850 featured the star violinist Joseph Joachim, she demanded the same salary as her male counterparts. The conservatory’s director was so impressed with her work that he immediately agreed to raise her pay.

In 1845, Louise Farrenc’s ‘Thirty Études in all Major and Minor Keys’ (Op. 26) became a requirement for piano students at the Paris Conservatory. In 1840, the Paris music critic Maurice Bourges (the writer who also praised her symphonic talents) astutely predicted in La Revue that the collection would be used “not only to develop technique but also to mould taste.” Farrenc won the Académie des Beaux-Arts’ Chartier Prize for chamber music composition twice. (The prize was later won by Franck and Fauré). However, despite her impressive track record as composer, she wasn’t permitted to teach composition at the Conservatory – women were not even allowed to enroll in composition classes until 1870.

Farrenc certainly enjoyed a much stronger support system than her contemporaries. Fanny Mendelssohn was discouraged from publishing her music by both her father and younger brother Felix, whose career overshadowed her own. Clara Schumann, who had eight children, suffered from extreme self-doubt. “I once believed that I possessed creative talent, but I have given up this idea,” she wrote in her diary. “A woman must not desire to compose — there has never yet been one able to do it. Should I expect to be the one?” Her husband, Robert Schumann, did not encourage her: “having children and a husband who constantly improvises does not fit together with composing,” he wrote in his diary. “Clara herself knows her primary occupation to be a mother.” 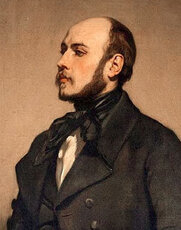 Farrenc briefly interrupted her studies at age 17 to marry the composer and flautist Aristide Farrenc, with whom she briefly toured. The couple founded Éditions Farrenc, a successful publishing house and a vehicle for publishing Louise’s works. They were both deeply interested in early music and released a 23-volume anthology of music for piano and harpsichord called Le Trésor des pianistes, which Louise helped compile and edit.

Aristide also actively championed her career as a composer. A young colleague noted that Aristide “was able to sense his young wife’s talent, to encourage her, virtually force her, they say, to make available to the public works which her modesty, of a degree rarely encountered, impelled her to keep unpublished.” After Aristide’s death in 1865, Louise continued as the sole editor.

Farrenc undertook her performing, composing and scholarly activities alongside a full teaching load at the conservatory, where she began her tenure as professor of piano in 1842. She and her pupils at the conservatory performed 17th and 18th century repertory in salons, observing the period style that Louise, a pioneer of Renaissance and Baroque music scholarship, had researched. Her pupils included her only child, Victorine, a star student who won the school’s premiere prix in 1844.

Brahms famously spoke of his anxiety about writing a symphony in the shadow of Beethoven. If Farrenc had any qualms about approaching the genre, it certainly doesn’t show in her three masterful, distinctly Germanic sounding symphonies, all written in the 1840s. Farrenc’s Symphony No. 3 was even premiered in the same program as a performance of Beethoven’s Fifth Symphony, then one of the most popular symphonies in Paris. 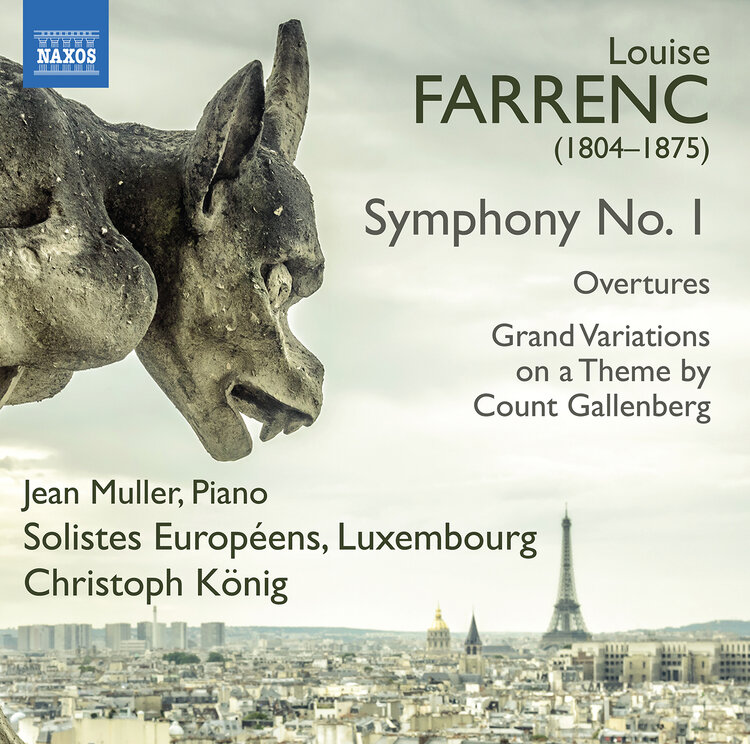 Take, for example, the Louise Farrenc works recently recorded and released in this Naxos album. Her first symphony is charismatic and masterfully orchestrated, beginning with the opening moody theme that emerges in the lower strings and is repeated in the winds. The wistful Adagio Cantabile demonstrates her gifts as a melodist, and the fourth movement finale unfolds in a blaze of Beethovenian energy and optimism.

Farrenc’s two Overtures (No. 1 in E minor and No. 2 in E-flat major) were both composed in 1834 and, like her symphonies, are deftly constructed works full of contrast and texture. Finally, the Grand Variations on a Theme by Count Gallenberg serve as an exciting vehicle for a virtuoso pianist, with the vivacious outbursts balanced by introspective, melancholy passages.

Farrenc was certainly the rare composer (male or female) writing symphonies at a time when the genre was decidedly out of fashion in Paris. Her orchestral works received infrequent performances during her lifetime not because of her gender but because of logistics and local preferences. Opera, vaudeville and salon music were then popular in Paris, and there were few professional orchestras that focused on symphonic repertory. Even with her connections at the Conservatory, she had to wait a few years before the Société des Concerts du Conservatoire gave the premiere of her dynamic third symphony.

As the Belgian musicologist and critic François-Joseph Fétis observed in his Biographie universelle des musiciens, the symphonic genre requires “performance resources which a composer can acquire for herself or himself only with enormous effort.” Fétis also observed that 19th century orchestra administrators faced a problem that 21st-century concert programmers can probably empathize with: overcoming audience resistance to new music or unknown composers. “Another factor here is the public, as a rule not a very knowledgeable one, whose only standard for measuring the quality of a work is the name of its author,” wrote Fétis in his book. “If the composer is unknown, the audience remains unreceptive, and the publishers, especially in France, close their ears anyway when someone offers them a halfway decent work.”

Farrenc was devastated when her daughter died in 1859 at age 33. She never composed again, but continued to teach at the conservatory until a few years before her death. The New York Times obituary in 1875 described her as “a musician and composer of considerable distinction”, but her music fell into obscurity soon afterwards. Just as Farrenc had exhumed and championed the music of earlier periods, however, her own scholarship and compositions found a champion a century later in Bea Friedland. As executive and music editor of the Da Capo Press, Friedland oversaw the release of a facsimile edition of Farrenc’s anthology Trésor des Pianistes. She also wrote numerous articles exploring Farrenc’s life and work and published a well-received biography in 1980.

While Farrenc lacks the name recognition of Fanny Mendelssohn or Clara Schumann, her alluring music is enjoying a much-deserved renaissance. She also deserves wider attention for her pioneering work as a scholar and feminist activist working a full century before a gender equality law was passed in France, where (as in most countries), wage inequality is still the norm.

Farrenc’s story is certainly a timely one for Women’s History month, but the accomplishments of this gifted polymath merit appreciation year-round. Her activism should serve as an inspiration for marginalized people in any field who must continue to fight for equal opportunities, recognition, and a fair wage.

- Written by Vivien Schweitzer
Vivien Schweitzer is a New York-based critic, journalist and pianist. Her first book, "A Mad Love: An Introduction to Opera", was published in 2018.